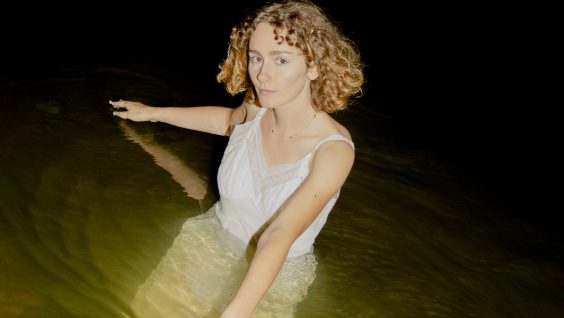 Alexia Avina’s folk-inspired, drone-studded sound has been celebrated in Quip, Paste Magazine, Exclaim.ca and elsewhere. The singer-songwriter’s distinct vocals strike a balance between deliberate, drifting and vulnerable, and her lyrics read as deceptively simple poems, full of hidden depths. One can’t help but swim into feelings of calm introspection while listening to her 2020 album, Unearth.

This December 2021 interview between Instrumental’s Rudrapriya Rathore and Alexia Avina was edited for clarity and conciseness.

RR: How would you describe your journey so far in becoming a musician? How has that intersected with your mental health journey?

AA: A big part of how I’ve interacted with writing music has been largely to process things in my life. It’s not necessarily that it gives me emotional closure, but in a certain way it helps externalize my feelings, like a kind of transmutation that makes those feelings more bearable.

As I’ve started to incorporate more ambient textures to the kinds of songs I write, I’ve noticed that if I’m practising an especially drone-y song, it’s so settling for my nervous system.

RR: That sounds almost like vibroacoustic therapy. Is that part of the effect you’re trying to create for listeners too?

AA: I’m not intentionally trying to create a therapeutic sound for the listener, it’s more so what I naturally gravitate towards, but it does seem to translate to how other people experience the music, whether it’s live or recorded. I do love that this happens for people sometimes.

RR: Part of what we’re trying to do with this project is get the message across to young people that listening to music can be an important part of self-care. It can be a way to process things, but also give the mind time to rest. How do you take care of yourself as a musician? Does that happen for you while you’re making the music?

AA: Making music is something I do to take care of myself, and sometimes I forget that it’s an effective way to take care of myself. It’s only recently that I started to return to making music when I’m trying to work through something. In the past it was more like, let me put my music aside, put it on pause, and try to fix whatever is going on in the “real world” first. I only recently remembered what I was using music for, which was a way to sit with the difficulty of my feelings and transform them. So in that capacity, making music is definitely an act of self-care for me.

Apart from that, I would say a big part of what I try to work on is mindfulness. Sometimes when things are overwhelming and you don’t have the courage or resources to face it directly, I would say distracting yourself is also an act of self-care. In those moments, it’s helpful for me to just listen to ambient music. Especially if I’m feeling a persistent anxiety, music really permeates into my being and the way I’m engaging with my surroundings.

AA: I think the dialogue around mental health has changed so much just in a span of a few years. I’ve always been very in touch with my inner world. There was a period in my early twenties when I really struggled with anxiety, fixating on things. But in my experience, these things have been great teachers for me…because as the years have gone by, it’s been so valuable to see that my anxiety is not permanent. These feelings have the capability to change, and they have changed.

RR: Right, and it’s hard to say when anxiety is actually a rational response. Sometimes anxiety is the correct reaction to the world we live in.

AA: Yes. And I think most importantly, we can develop the capacity to be with the discomfort of that feeling. Those feelings come and go, and there’s nothing wrong with feeling anxious given the state of the world that we’re living in. It’s about being able to be present in the feeling.

RR: How did you develop that ability to sit with the discomfort? I think so many of us understand that emotions are impermanent on an intellectual level, but not on an experiential and emotional level.

AA: What really helped me was practising Vipassana meditation. I went to my first ten-day retreat a few years ago. That technique focusses on recognizing impermanence in a very physical and meticulous way. It was a big part of my being able to get that experiential knowledge. It opens something up inside of you. I think it was the hardest thing I’ve ever done, that first silent retreat. You must sit with everything you don’t want to face.

RR: That sounds life-changing. How has that experience changed you as a musician?

AA: I did my second retreat this past fall and I performed a show shortly after that. I sometimes suffer from stage fright, and that show in particular, I was able to observe the nervousness in my body. I could feel it and let go of it much sooner and drop into the experience of playing. I was able to feel that it would be okay even if I made a mistake on stage.

RR: What would you tell younger people who are interested in creating music?

AA: I would say, don’t hold yourself back from writing. It might take time to find your sound, and even then, there’s always room to expand what you’re capable of creating. Don’t get caught up in searching for external validation. That’s the least important part of it. Keep the process sacred and honour your relationship to music.

RR: That’s lovely. And what would you tell your own younger self? Is there anything you wish someone had told you when you were younger?

AA: Honestly, I think the same thing. These are thoughts I’ve been working through in my twenties. I got sidetracked for a while, but that’s okay. I wouldn’t change anything I’ve been through because I learned so much.

RR: What’s next for you? Any plans coming up?

AA: Musically, yes, I have a lot of plans. I’m going to be releasing an ambient pop EP in 2022. That was an experiment in creating something without holding on to it for too long. I have two other records of mine that are mastered and ready to go, hopefully also coming out in 2022. And I’m in the process of recording more as well. So, lots of music.